After six years of the study of the Hebraic heritage of our faith and these last nine months studying early church history; I honestly have felt some confusion! It seems God likes to get me good and lost before He finds me! God’s feasts and holy law. . .verses the traditional church calendar and what many call the “new law of Christ”.  If God is the same yesterday, today, and forever, then what of all this mess?  That in itself would be a book to write, so I will stick with the current Holiday-Season and go with one theme.


I feel like for the first 27 years of my life a celebrated a Christ-mess!  Several years ago the Lord asked us to lay all of that down.  It was a little difficult but I honestly didn’t see what all the holiday mess really had to do with His incarnation anyway!  Study of history showed that the Church more than likely took a pagan holiday and just put a big “Jesus” sticker on it to justify all the parties and revelry that was going on among pagans (and some Christians) during the Winter Solstice.  So letting go of this didn’t really seem like a very big deal to us. Overeating, overspending, watching football and the Macy’s parade didn’t really seem too heretical to give up each December.   We saw banners that read “Keep Christ in Christmas”. . . . So television shows like “Desperate Housewives” do a special Christmas episode and I am suppose to be happy that they have called it ‘Christmas’ and not ‘Holiday’!  That’s what this big Christ-mess is.  How did God’s holy named get dragged into the mud of celebrity albums, inappropriate holiday movies, and drunken parties?  I asked myself why in the world and early church Christian would have mixed God in with the pagan revelry going on at the time.  After MUCH study (and time) the mess is beginning to clear up a little.  As it turns out, the early believers didn’t try to stick God’s name in the middle of the pagan festivities.  They instead held a special MASS to honor Christ in the attempt to turn the pagans away from idolatry and to the Lord Jesus.  If you are a Protestant you may have no idea what a MASS is. Well, that is part of what I researched this year.  Mass comes from 'Missio' meaning:  ‘to be sent forth’ of which is also derived the word 'Mission'.  (Scripturally derived; see Mathew 28:19 -' go therefore and make disciples of all nations' Or again: Mark 16:15: 'go into all the world and proclaim the good news'.) If you have ever attended a Catholic Mass then you know the entire service is a proclaiming of the death, burial, and resurrection of the Lord.  At the end of each Mass are the words: "Ite, Missa est”. . . or “Go, you are sent forth”.  As in. . . now you are to go and proclaim the good news!


So in a pagan world the early believers held a special Christ-Mass to proclaim the good news to those who were worshiping the sun god.  Come out and away from your partying, gluttony, selfish ambition, and idolatry and come and meet the One who brings light to the Nations!


Isaiah 9: 2 The people who walked in darkness have seen a great light; Those who dwelt in the land of the shadow of death, Upon them a light has shined.


If you are not Jewish, this verse is about you!  (Remember before the birth of Christ, Israel is the only people group that knew the one true God.)


Now I must ask, what has happened?  Through the years we may have kept Christ’s name involved but many of the practices of the heathen have been adopted in.  The Christ-Mass was meant to draw people out of darkness and to the Light.  It was meant to bring the nations to worship the one true God of Israel.  How has this great Mass (telling) turned back into a mess over the centuries?  That is not a question I can answer for anyone but myself.  I had personally allowed Christ’s-Mass to become just a fun time to eat, drink, and be merry.  A time for me to get stuff.  A time for me to get time off of work.  A time for me to; me to; me to. . . . (ME–ME- ME -ME! It’s all about ME!)  Instead of letting the Light shine into my darkness, I had chosen to take on the ways of the nations and put Jesus as my ‘side dish’ each holiday season.


For six years my family has celebrated the nativity of our Lord in the fall during the Feast of Tabernacles.  History gives a good argument for this being the accurate time and after all the scripture tells that:


The Word became flesh, and did tabernacle among us, and we beheld his glory, glory as of an only begotten of a father, full of grace and truth. (John 1:14)


This has been a great time of cleansing out all the dross in our life. (Okay, I guess it’s not all out yet, but we are working with the Lord on that!)  It caused us to get rid of the mess we had allowed in.  And though we will continue the celebration of His birth at Tabernacle, we have now had the Christ-mess cleared up and are able to see the original intention of the Christ-Mass.


This year we participated in Advent for the first time.  Our family lit the advent candles while reciting the liturgy, prayers and scripture each week.  We experienced a Chrismon service.  Our children opened the Advent calendar and read the daily devotions that go with it.  We really felt that time of “preparation”.


As for Christmas:  We attended the actual Christ-Mass at St. Anne’s this morning.  Then we took our children to the local nursing home to sing worship songs and give out gingerbread cookies to the residents. We talked with a sweet gentleman who was a little down as he no longer has any family. Perhaps, in a small way, we were able to bring Christ to him today.  No gifts for us; for the gift of Immanuel has come to the gentiles!  If you feel like you are stuck in the middle of all the mess that culture has created, don’t be afraid to take a time out, and bring the Light back into focus!  How the Lord has you and your family bring this about will be different than my families journey.  Just be open to His voice and allow Him to clean any mess that may have come in over the years.


May God’s peace rest on you, people of good will! 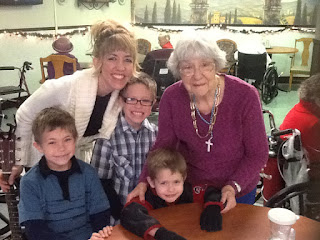 Fun at the Nursing Home!


Posted by Angela Asbill at 1:34 PM No comments:

Prepare Ye the Way of the Lord!

On December 9th, 2012 my oldest son, Josiah Samuel Asbill, was born again from above as he entered the covenant of faith through water baptism.  My husband and I had spoken with him about it two years ago as we began to see faith becoming real to him.  At the time he said he wasn’t ready but would tell us when he was.  We didn’t push him as we wanted it to be 100% his decision.  Two months ago he came to us and said, “God told me it’s time, and He wants me to be baptized during Advent”.  To be honest my husband and I were a little surprised as this would be our very first time to celebrate Advent (see my article on Advent for that story), but we knew he had heard the Lord.  As we began to study we realized that Advent is a spiritual time of preparation.  A time to prepare your heart with repentance as well as renewing your expectation for the second coming of our Lord.  Each Sunday has different liturgies and scriptures read.  This year the reading for the 2nd Sunday of Advent (the day of my sons baptism) covered John the Baptist!  John calling on people to repent, and prepare the way of the Lord by being baptized. . .


December 9th also happened to be the first day of the Feast of Dedication (aka Hanukkah).  The Feast of Dedication is about the cleansing and rededicating of the temple in Jerusalem after it had been destroyed with idols and pagan sacrifice by Antiochus Epiphany.  It may be a Jewish Feast, but that Jewish Feast was celebrated by our Jewish Messiah (see John 10:22-23) as well as his Jewish disciples who encouraged us with these words:


1 Corinthians 6:19 Or do you not know that your body is the temple of the Holy Spirit who is in you, whom you have from God, and you are not your own? 20 For you were bought at a price; therefore glorify God in your body and in your spirit, which are God's.


During Hanukkah each year our family remembers to rededicate our lives and temples to the Lord with prayer and repentance. So take all of this in and realize that in a time of year that the world is over-eating, maxing out credit cards, and attending elephant gift exchanges, my ten year old stopped to listen to the voice of the Lord calling him to repentance, cleansing, and dedicating his temple!


Before the baptism our Pastor spoke a word over him; the Josiah of the Hebrew Scriptures being called as a prophet that called his people to repentance and back to God’s Law.  Our pastor confirmed this as the call on our son’s life (and if you don’t know our Josiah, Pastor Rick hit the nail on the head!).  Josiah was then dressed in a white robe as a symbol of the purity and cleansing of baptism.  Our Pastor took him through a series of questions asked before the entire church about his commitments to serve God, repent of his sins, and walk in the way of the Lord.  As I watched my son go through the “second-birth” I have to say that as a mother it was even more powerful than the experience of his human birth (and less painful!).  When he came up as the new creation the scripture promises our Pastor anointed his head with oil in the form of the cross and then allowed our entire family to place hands on him and bless him.  What I forgot to mention is that not only Roman, myself and our other children were there, so were his Grandparents and Great-Grandmother.  Four generations of those who are called to the House of our God!  Now my grandmother has witnessed the baptism of her children; her children’s children; and her children’s, children’s, children!  Wow!


Psalm 145:4 One generation shall praise Your works to another, And shall declare Your mighty acts.


I share the joy of this day with all of you to present a challenge.  Don’t wait for the New Year to “resolve” to be different.  Follow the example of a ten year old little boy, who opened his heart to hear the Fathers voice and answered.  Take this time to quiet yourselves before your King and ask what ways you need to prepare your temple for His coming!


Matthew 3:3 "The voice of one crying in the wilderness: 'Prepare the way of the Lord; Make His paths straight.' " 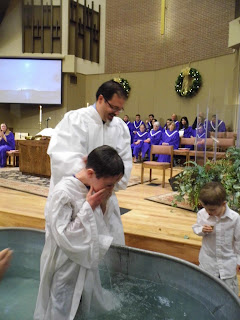 Posted by Angela Asbill at 12:52 PM No comments: